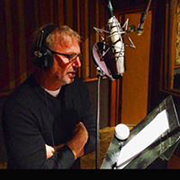 Automated Dialog Replacement is used in film, video and television to allow actors to improve upon and repair lines that were flawed during the shoot. Santa Barbara Sound Design has invested in leading edge technology that allows an actor to be located in our studio in Santa Barbara and connected to any sound stage around the globe, thereby delivering lines in real-time over a bi-directional link.

In the area of ADR we have implemented the Source Connect Pro software plugin into our Studio A Pro Tools system which allows us to interconnect in real time with any similarly equipped soundstage across the planet. Using a high speed, dedicated internet like connection, the actor or voice talent is available to the remote sound stage as if they were present in the recording both at their location.

As an evolution and replacement for ISDN technology Source Connect allows both facilities to work while synced to picture and exchange high quality audio between them. Plus, for media companies and ad agencies that have invested in ISDN and choose to still utilize that technology there are now several ‘bridging’ facilities we work with that interface with both studios invisibly and change the Source Connect stream bi-directionally into the ISDN technology of your choice. It is completely seamless. 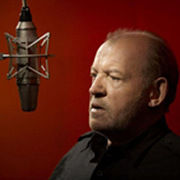 A core component of our work at Santa Barbara Sound Design has been music recording and production for over forty years. This specialization makes significant demands on the studio environment, equipment and people to be knowledgeable and endowed as to acoustics, microphones, preamplifiers, sound processing gear like equalizers and compressors, mixing systems, clear and articulate audio speaker and monitoring systems, and musician amenities like headphone systems that allow each performer to hear themselves so as to deliver their very best possible performance.

At Santa Barbara Sound Design we have an historic collection of microphones and Neve preamps, followed by top of the line Analog to Digital and Digital to Analog converters, that together with our clean power electrical system and well designed acoustic spaces print to computer (or tape) absolutely stunning and clear high resolution tracks. Quite often major acts choose a tracking facility based on the things described above because they realize that it is the integrity of that first stage determines the quality of the final project's audio. It becomes so much easier to overdub and mix when the tracks sound great and need little adjustment or attempt to manufacture quality when mixing. Tracking includes the overdub process where singers use our impeccable and extensive mic collection to find the mic that flatters and presents their voice the best.

Often the newest recording facilities are restricted to mixing entirely in the computer(ITB) using plugins to make adjustments to the elements in a mix. While we do this as well at Santa Barbara Sound Design , it is commonly known that the sound mixer is at a disadvantage when no analog processing is available during the mixing stage. At Santa Barbara Sound Design we have the highest integrity analog mix path available today in the NEVE 5088 where the audio path has extreme detail and headroom. Add to that an extensive collection of analog and tube outboard processing to sweeten tracks on their way into the mix, and an extremely diverse and extensive plugin selection inside our Avid HDX ProTools computer which all together provide a platform for the sound mix engineer to deliver extremely high quality results. Clients are welcome to use our experienced mixer, Dom Camardella, or have their own sound engineer make use of our system knowing that Dom is available to consult and interface in a 'hands off sort of way' to help the client's team to know what is available to yield the best result.

Mastering is the very last stage in a project where finished stereo mixes are given a final once over in preparation for their release into the marketplace. This is an extremely critical opportunity to bring out every ounce of quality and intention in the music. Similar to the mixing stage many audio engineers are not equipped with the tools to accomplish this in a truly professional fashion. It requires great monitoring speakers that are known for their truth in presentation and also audio processing gear in the analog AND digital domain that are among the most costly on the planet. This is because tools that will work on entire blended two track mixes are being asked to do very difficult tasks and must be designed for that task from their inception.

At Santa Barbara Sound Design over the last ten years we have seen several of the old guard in the mastering business retire and/or pass on leaving a need to be addressed in today's marketplace. To that end we have equipped ourselves for this important process. Furthermore on-line mastering services have cropped up which apply a one-size-fits-all approach to mastering. Upload your track, have it processed and delivered back to you electronically. Where this misses the mark is that in proper mastering a human interacts with the music and uses a lifelong well of experience to determine how and why certain processing should be utilized. You the client gets to interact with the mastering engineer and express what you would like from the process as the engineer customizes the process to your music. Dom Camardella has been mastering music projects for ten years now.

What was once a modest market has now become a major revenue niche for the printed book publishing industry. Adding a modern shift and fresh vertical market to their bottom line these publishers and author's themselves turn to Santa Barbara Sound Design for the expertise to record, edit, clean, refine, and deliver the audio to their marketing departments.

Audio books have become a great alternative method for using your time on long drives in your car or workouts in the gym. Due to the growth in the marketplace printed book publishers have been aggressively making sure that their library of titles are being read by the author or professional narrators so that these titles can be purchased and enjoyed in your car, or downloaded into your phone or tablet device for your listening enjoyment and enrichment on the go.

Santa Barbara Sound Design identified this growing niche at the turn of the year 2000 and has become a go to location for recording audio books. We have recorded numerous narrated books for Audible.com as well as author narrated books for all the major publishers in the industry. Numerous awards have been received for our work and just this February we were awarded a Grammy for best audio book for our work with Carol Burnett. A few other authors worth mentioning are: TC Boyle, Fannie Flagg, Jack Canfield, Rob Lowe, Stephen Mitchell, and more.... 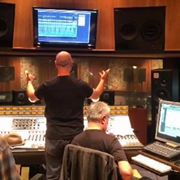 Expanding on the visual experience of a nature film, documentary, or narration of an audio book, audio sound design creates stunning effects and audio environments whose intention is to immerse the listener or viewer in the story being told. It takes extensive experience and dedication to develop this skill. At Santa Barbara Sound Design we have helped our film-makers earn major awards and have ourselves been awarded as finalists in nature film competitions whose ultimate winning rival was Disney.

For the last ten years Santa Barbara Sound Design has been involved in bringing studio quality mixing and recording to the live performance setting. This part of our studio's mission was created in response to the skills provided by Adam Camardella, Dom's son. Starting in his mid-twenties, Adam went out on tour with jazz great Charles Lloyd first as a roadie and within a year stepped up to the role of his Front of House (FOH) sound mixer.

This all got a major boost when Dom and Adam as a team mixed Anita Baker's live show at the Nokia Theater in LA in front of nearly 10,000 people. It was then when that a new service had arrived to Santa Barbara Sound Design.

Now, over ten years later, Adam has worked 100's of the major concerts venues around the globe. He specializes in artistic musical environments where name brand artist's display their craft. He has worked with the most gifted jazz and pop musicians on the planet. Additionally, as an added service he can bring a remote multi-track recording rig to capture these live shows for his clients while he mixes the concert. When needed, Santa Barbara Sound Design has equipped Adam with one of the highest audio quality live sound digital mixing systems available from DigiCo.

Quite a few of his traveling recordings have found their way onto major releases. Particularly noteworthy is his work for Charles Lloyd released on ECM Records in Europe and Blue Note here in the US. Most recently he has expanded his skill set into the realm of musical theater live performance mixing and together with his dad offer a service to the local community to bring big-time ears and experience to the local performance stages in Santa Barbara. All too often local sound companies acquire good equipment but do not have the knowledge and experience and practices used by the world-class sound companies. The results never quite make it to the professional level of sound quality audiences demand and experience when national traveling acts come through Santa Barbara. It is the mission of Santa Barbara Sound Design to augment the local staffing, bring high-end science to task and help take it to the 'next level' for local music and theater performances.